skip to main | skip to sidebar

Chief Blankets are characterized by their design elements--alternating bands of brown and white--but also by their dimension: The width of the warping on the loom is greater than the length of those warps. These dimensions are seen in Chief Blankets and also in the smaller Pueblo and Navajo mantas and Women's Shoulder Blankets. Serapes and later most rugs were woven longer than the width of the warped loom.

The Germantown weaving shown below would not generally be called a Chief Blanket, but it was woven on a loom set up for Chief Blankets. It was woven at a time when a weaving's intended use as a blanket was fading, and the influence of the rug trade was increasing (it shows elements of the rug designs placed on the walls of the Hubbell Trading Post--a modern influence in the 1890s). To me it speaks to the process of innovation that weavers of the time engaged in; her last weaving on the same loom may have been a traditional Chief Blanket. Her next weaving on the loom might have combined the newer and older styles. 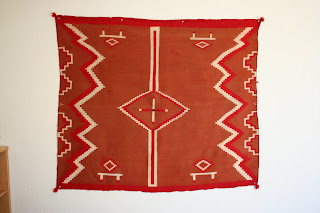 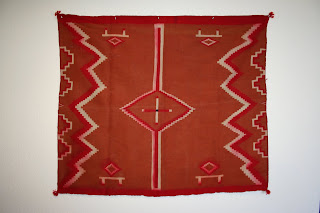 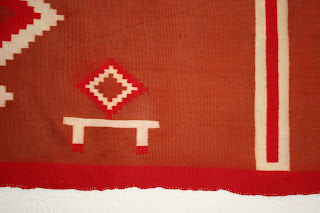 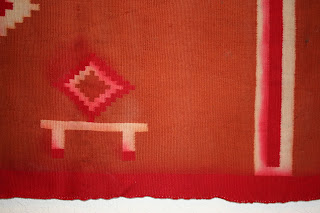 before treatment
Posted by textival at 3:53 PM

Labels: before and after, Germantown Navajo color run removal

I’ve seen all your blog posts and I am astonished by never ending passionate talks about rugs and carpets. Amazed by the treatment and procedures, I kept browsing and eventually learning about carpets. Little did I know that I haven’t yet explored the real wonder of this beautiful rectangular cloth, I clicked and clicked. I was first introduced to this by a time I watched a man doing a carpet cleaning. Hartford was experiencing a real hot summer then, and every home has to get rid of the countless dust brought by sticky humid wind. The interest grew like a blossoming orange tree, and then I found your beautiful blog.

I’ve seen the traditional rug and I was so in love with the classic design. I’ve been looking for this kind for every store I had visited during my world trips. Wish you could post about traditional Indian-American carpets and anything related to it. Thanks!

Very well said. These tips are really amazing. I appreciate it for sharing them.
carpet cleaning hartford